Skip to content
Lou Lou Girls > Uncategorized > How to Make a STRONG Piñata! 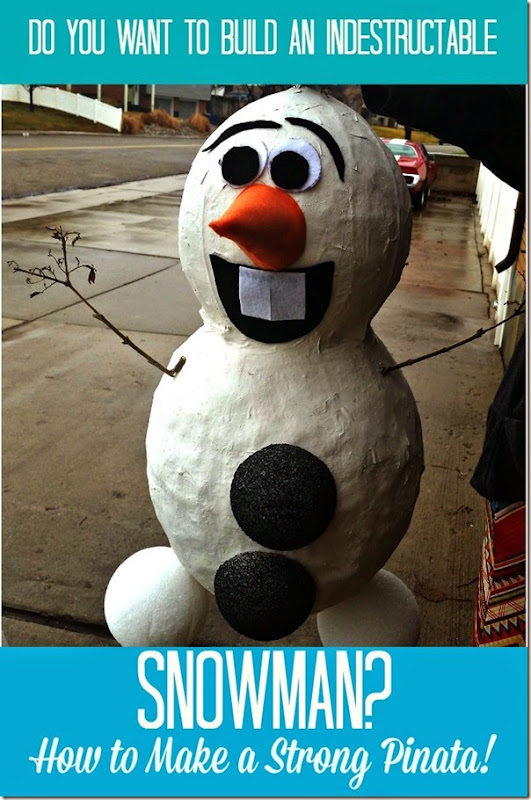 Our family is really into piñatas! Every year we make/destroy at least 3 or 4. Birthday parties, and our annual Christmas Party are the main reasons for piñatas. Now that our family is getting older, with a lot of the ‘kids’ having kids of their own, we have to make SUPER INDESTRUCTABLE piñatas. Everyone wants a turn to whack at it1 Let’s face it, it’s fun at any age! I can’t take credit for this technique. My dad has perfected it over 30 years of piñata making. If you have small kids, and you want them to be able to break it, just do the first few steps and skip the cheese cloth. If you have kids that are over 8, you should probably think about strengthening the piñata. Nothing’s more depressing than not getting a whack at the piñata, because someone else already destroyed it! The piñata in the pictures is actually this Santa one. I didn’t get a good picture of him when he was finished though, so that’s why I used Olaf in the main picture, the technique is the same though, and you can make whatever you can dream up! 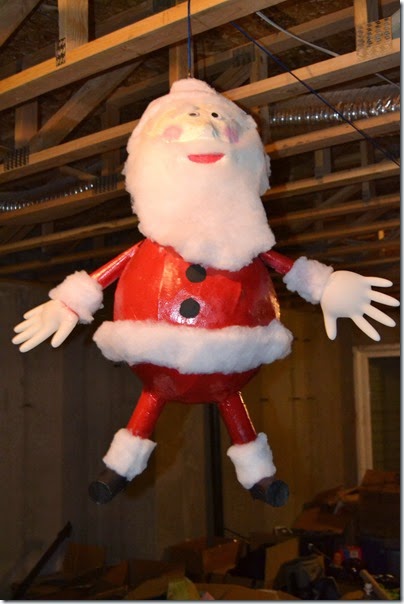 Okay here’s what you’ll need… Newspaper cut into strips flour water punching bag balloons A plastic table cloth wire or string cheese cloth candy or small toys A heavy duty, wire dog leash with a spinning clip 1- Start by covering your surface with a plastic table cloth, or a garbage bag.  The flour mixture is NOT fun to clean up once it’s dry. You’ll thank yourself later! 2- Make your glue. Combine flour and water until it’s a thick, but workable paste-like mixture. We always just eyeball it. Looks lovely, right?! 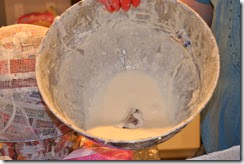 3- Inflate your balloon/ punching bag and set it on top of an empty bowl. This will help balance it and keep it from rolling away every few seconds. 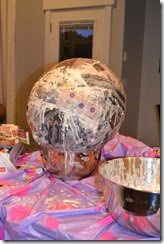 4- Now start dipping your cut up newspaper strips in the flour and water mixture. Make sure you use your fingers to get any excess off. If your first layer of paper is too heavy, it could make your balloon collapse under the weight. So only do one or two layers at a time, making sure it dries completely in between. (Mike, my hubby, got fancy and put on my cleaning gloves, but you only need those if you’re a sissy! Haha, now we’ll know if he reads this!) 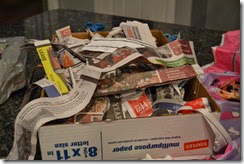 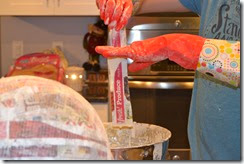 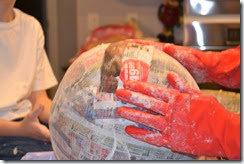 6- Keep adding layers of newspaper, allowing them to dry, for as long as you think you need. We did about 7 layers of newspaper. Then add cheesecloth over the top of your newspaper. We got our cheese cloth at our local Ace Hardware store. Cheese cloth is super strong and makes the piñata indestructible. We’ve tried many different things over the years, and this works the best. Trust me! Use the same flour and water mixture to make it stick to the newspaper. 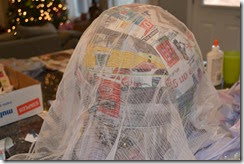 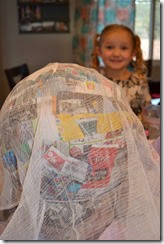 7- Now it’s time to add the wire or string. This is what you’ll use to make sure that the piñata will keep hanging until it’s destroyed. We used wire, and just wrapped it around the entire ball twice so that it was cradling it. Then we twisted it off at the top. This is where you’ll later attach the hook to whack it! 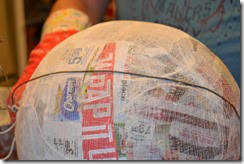 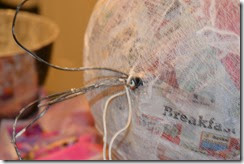 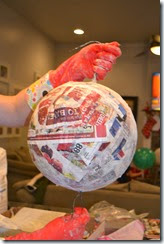 8- Now you just need one more layer of newspaper to cover the cheesecloth and wire. So you have a nice surface to paint. Make sure to do it as smooth as possible on this last layer. The pinata in these pictures is actually a Santa pinata, so you can see the nose we made out of a wad of cheese cloth. 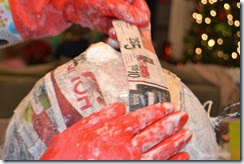 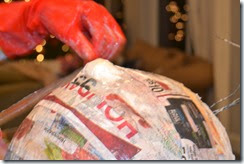 9- For our last layers we used colored craft paper instead of newspaper so it would be easier to paint. You can still just use newspaper, just cover it with a good layer of spray paint. For this Santa we repeated the whole process twice, and then twisted the wires together in the middle too, so that the body wouldn’t separate from the head. 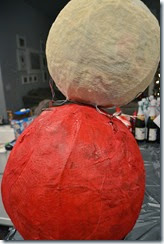 10- Now you can cut your hole in the pinata to add the candy. We used ping pong balls this year inside. Two of them had a smiley face on them, and the person that got the smiley face won an extra prize. 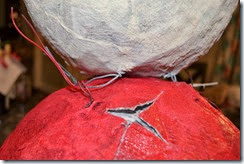 11- Now’s the fun part. You can decorate it however you want. We added arms to ours with inflatable gloves and paper towell rolls with a staple gun. I also used a LOT of hot glue. 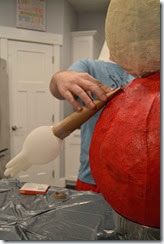 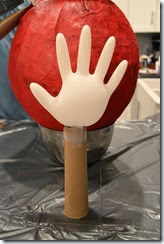 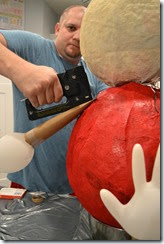 12- After all the decorating and major pieces were attached, we put one more layer of newspaper on it to smooth it our. Like I said, this is heavy duty! 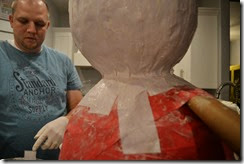 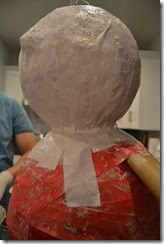 13- Now you can get busy with the fun stuff. We used those googly eyes for our Santa, and craft paint for his face. I had some left over batting, so I used that for the fur on his coat. For Olaf we used felt to make his face and Styrofoam balls to make his buttons. 14- Just make sure that you have a sturdy hook, so that the hook isn’t the first thing to break. This pinata technique made it through over 25 people hitting it with a stick. And most of those people were adult men. So, it’s REALLY strong! Have fun beating your snowman or Santa! We beat ours up in our lovely unfinished basement. It’s a disaster, and the perfect place for something like this. You can see that Santa was pretty beat up at this point, but is still intact! 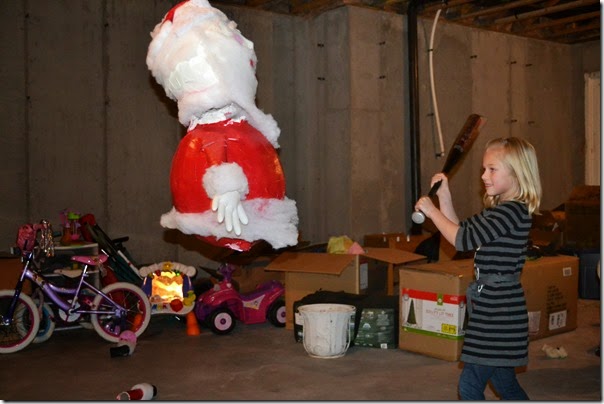 15 thoughts on “How to Make a STRONG Piñata!”